Several years ago I read a book by Mark Rubinstein, which I think was Mad Dog Justice, and

was so taken by his writing that I believe I’ve since read every book written by him. Mark is a superb author, but what I find so interesting about him is that he has the ability to write brilliantly in a number of different genres.

His newest book, Bedlam’s Door, illustrates that ability perfectly. Mark is a psychiatrist and in this book be shares his psychological experiences with the reader (and yes, the names have been changed!). This is a non-fiction book, but absolutely riveting. After I read it, I asked him if he would write a post about how he came to write this book. Believe me, this book is well worth your time and money! 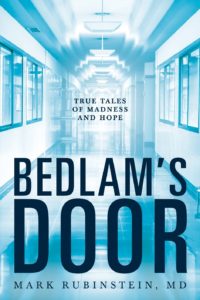 Why I wrote Bedlam’s Door: True Tales of Madness & Hope

After writing six works of fiction, what made we write a non-fiction book based on my experiences as a psychiatrist?

As a kid, I fell in love with Aesop’s Fables, Hans Christian Anderson’s stories, the Brothers Grimm fairy tales, and the Greek and Roman myths. It barely mattered whether the stories told about soldiers, heroes, villains, or described desperately conflicted people facing momentous obstacles. Looking back on the books I adored, I realize that aside from being entertaining, they conveyed elemental truths about humanity.

Love of stories was an important reason in my choosing to become a psychiatrist. Early in my medical school education and then during my residency, I realized that while many people may be diagnosed as having the same psychiatric condition, one-hundred different people will have one-hundred different pathways to the same disorder. Psychiatry has a remarkable human dimension, and at the heart of each story lie powerful emotion and choice—and above all, conflict.

When I became involved with forensic psychiatry—the intersection of psychiatry and the law—I became privy to some of the most extraordinary stories I’d ever encountered. Some were so bizarre, that if written as novels, they would strain credulity.

Why would a man of Hungarian descent run down a street ranting “I’m King of the Puerto Ricans.”?

Why would a psychiatrically hospitalized young woman sneak a razor blade on to the ward, give it to another patient, and direct her in slitting her wrists?

Why would a woman present herself to surgeons for a dozen operations when nothing is physically wrong with her?

Experience taught me that all patients’ stories funneled down to the basic elements of human functioning—how people think, feel and behave. It became clear that nearly all mental illness—no matter how seemingly bizarre—could be understood when attention was paid.

I realized mental illness posed challenges to patients, their families, and the people charged with their care. Our country is in the midst of a pressing crises to improve mental health care delivery. I also felt it was important to describe the life-altering advances being made in the diagnosis, treatment and prevention of psychiatric conditions.

Of all medical specialties, psychiatry explores people’s lives. Each case is a mini-biography revealing the circumstances and conflicts leading to symptoms. Above all, psychiatry has a human dimension, where each patient has a unique story, but at the same time, taps into a shared commonality.

Most of all, I wrote Bedlam’s Door to depict the humor, sadness, nobility, poignancy, and richness of our shared human experience.